Pictures of the guitar as it came in and after repair.
The Guitar was made in Chicago, Illinois, between 1935 and 1940.
It has a full 25"scale and a non offset spider so it is assumed to be a later one.
It is fitted with a Vox V1  pickup from the late 50's to 1963 and much later machine heads. 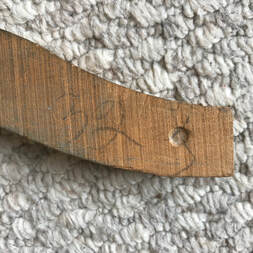 The grey finish was left untouched at the request of the owner. Yes I know !! (Again)
Powered by